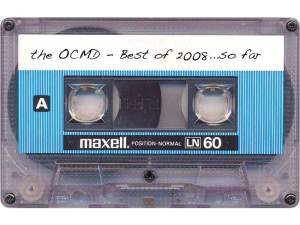 It’s the last day of July and half the year has gone and passed.  To celebrate, I’ve compiled a mixtape of my favorite songs (not albums) of the year…so far.  You can listen here, but if you want the file, you’ll have to subscribe to the OCMD Mixtape.  Enjoy!

Caution:  Contact high may occur while listening to this album, especially under the influence of black lights.

Okay, this Austin-based psyche rock band definitely fits nicely into my dark and moody ‘black’ band category.  The band, whose mantra is ‘Turn on, Tune in, Drone out’, has a very soul-satisfying stoner rock sound that draws references to groups like Brian Jonestown Massacre and The Doors.  Lead singer Alex Maas’ vocals have an eerie resemblance to Jim Morrison, in particular.

I adore their debut album, Passover, that was released in 2006.  Their new album, Directions to See a Ghost, released this a couple of months ago is a solid effort but not quite as good as their debut, in my opinion.  Definitely a band worth a listen regardless.  Check out this track, You on the Run,  from their latest album.