High Places – “On Giving Up”

High Places is set to release their second LP, High Places vs. Mankind, on Thrill Jockey in early April. The album takes on the daunting subject matter of being human and what it’s like to interact with other people. The duo cover a wide range of material from romantic relationships to addiction, aging, and death. Definitely a more somber and serious tone that their lighthearted debut. I like it. And this advance track, “On Giving Up”, has been firmly planted in my head all week.  Enjoy.

I’m the first to admit I like a lot of weird music and enjoy the novelty of discovering an unchartered sound. But there’s a new crop of critically acclaimed experimental/punk bands emerging like Times New Viking, No Age and, the subject of this post, Ponytail that I don’t frankly get.

I took some friends to see Ponytail and High Places (mostly the latter) last week at Bottom of the Hill to check it out in person. And, I still don’t get it.  Instrumentally, the band is tight.  But lead singer Molly Siegel is just whacked on so many levels, which perhaps is part of the allure.  After seeing her in person, I question whether she’s human.  Or sane. Without question she operates on a different frequency. She moves like Thom Yorke in an epileptic trance and sounds like a cross between Bjork and Yoko Ono.

To say the experience was jarring is an understatement. My music buddies all hated it, yet somehow can’t stop talking about it.  A photographer friend of mine, Rich Trager, took this shot of the wall in the mens bathroom.  And it seemed fitting for this post because it begs the question: is it art or is it trash? Ultimately you decide, whether or not you agree with the critics.  But Ponytail sure did stir something up in our group.   Everyone felt that performance.  And while no one may want to go back and visit that feeling again, it certainly won’t be forgotten.  Not be me either.  I’ll always be known as the one who drug my friends to that crazy show.

High Places is offering the beautiful track ‘From Stardust to Sentience’ off their forthcoming eponymous LP for free download.  The group is scheduled to play with Ponytail at Bottom of the Hill October 8.  Their EP – 03/07-09/07 – is one of my favorites of the year.  Can’t wait to hear more from this group.

Listen to ‘From Stardust to Sentience’: 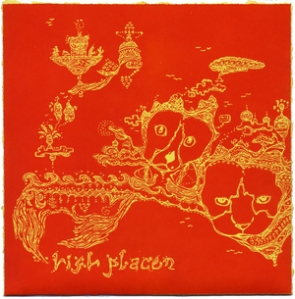 How to describe High Places sound.  It’s difficult.  To quote the band, “Where the ocean meets the forest, this is where we sing our chorus.” The Brooklyn-based duo, consisting of Rob Barber and Mary Pearson, take simple beat structures, layer it with echo and reverb and top it off with the pretty songs of cloud gazing and existential yearning. It’s heady and hypnotic in it’s repetition.  Charming and tranquil in it’s simplicity.

Their debut EP is a compilation of singles collected over a six month period, thus the title 03/07 – 09/07. The album is a pre-cursor to their full length LP scheduled for release September 23 on their newly signed label, Thrill Jockey.  I have high expectations.  Until then, enjoy 03/07-09/07 and make sure to check them out at Bottom of the Hill October 8.

It’s the last day of July and half the year has gone and passed.  To celebrate, I’ve compiled a mixtape of my favorite songs (not albums) of the year…so far.  You can listen here, but if you want the file, you’ll have to subscribe to the OCMD Mixtape.  Enjoy!

This is a fantastic up-and-coming San Francisco-based band that I ironically stumbled upon at SXSW this year.  It was one of those chance discoveries that left me mesmerized and wanting more.  I quickly made note in my iPhone and have had this album on heavy rotation ever since.

The stripped down, two-man band consists of Meric Long on guitar and vocals and Logan Kroeber on percussion.  Both are feature performers  – on the recording and live.  Their simplicity has drawn comparisons to a crop of new-primitivist bands like Yeasayer and High Places.  Whatever the case, you should listen to this album and make a point to see them live.  For all you SF locals, that would be June 19 at The Independent.