The new video from Caribou for “Odessa”, the single of their forthcoming album Swim on April 20.  Cannot wait for these guys to swing back through town.

Loved this music video from the Montreal-based duo calling themselves Beast. The video is so good it received a Grammy nod for Best Short Form Video.  Enjoy!

Standing on the floor of LA’s Music Box Theater last night waiting for the Radiohead Benefit for Haiti to begin, it was hard not to muse over the crowd – a mix of the star-studded Hollywood elite and die-hard fans.  On my immediate right was 007 himself, Daniel Craig.  In front of me, some dude from The Practice (sorry, not up on my TV).  And to my left was a lone 18-year-old kid in a fur earflap hat trying to borrow one of our mobile phones so he could text his friends he made it in.  Hmm, I thought.  If you don’t even own a cell phone how could you possibly even afford the $475 minimum ticket price for tonight’s show.  Turns out he traded a scalper his MacBook Pro for a ticket.

Clearly, this wasn’t your average Sunday night.  Nor was this your average concert. This was Radiohead, one of the biggest and influential bands of our time, getting ready to play a one-off gig at a venue the size of San Francisco’s Bimbos 365 Club. It was a once in a lifetime opportunity and everyone knew it.

At 8:30 Thom Yorke and company took the stage and set the intention for the evening: “It’s going to be a sing along tonight.” And indeed it was.  They gently eased us into an epic evening of music with  “Faust Arp” followed by “Fake Plastic Trees” and “Arpeggi/Weird Fishes”. Then all hell broke loose when they launched into “National Anthem”/ “Nude”/ “Karma Police”. If you weren’t sing along or yelping with glee, you were finding God, speaking in tongues and uttering phrases like “Jesus Christ… Oh my God…Oh my FUCKING God!!!”

Yes, it was a religious experience.  The best moment? Pick one.  Pick any.  Like when Yorke serenaded us on the piano with “Everything In It’s Right Place,” or the novelty of the band asking the audience to choose the next song: “Just” or “Airbag”. (The latter won.) Or the sneak preview of their new song, “Lotus Flower.” It was all insane.  But for me, I lost my mind at “Bodysnatchers”.

In the end, and most importantly, the band raised over $570,000 for Haiti. We all helped to support the cause.  And we all walked away with an experience we won’t soon forget.

First Encore
Everything in It’s Right Place
You & Whose Army?
Pyramid Song
All I Need

The new year is just underway and the countdown has already begun- to NoisePop, SXSW and a bevy of highly anticipated albums, like Massive Attack’s 5th studio album, Heligoland, due out February 9. The album will feature guest vocals from the likes of Hope Sandoval (Mazzy Star) to Martina Topley-Bird and Elbow’s Guy Garvey. The prelude to Heligoland, the Splitting the Atom EP, is available now. 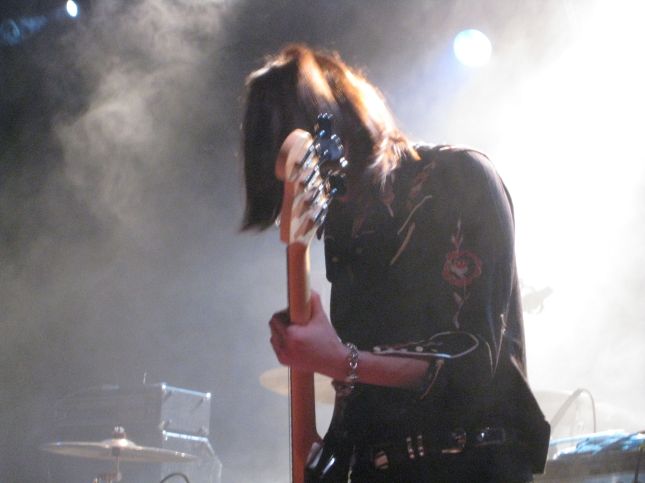 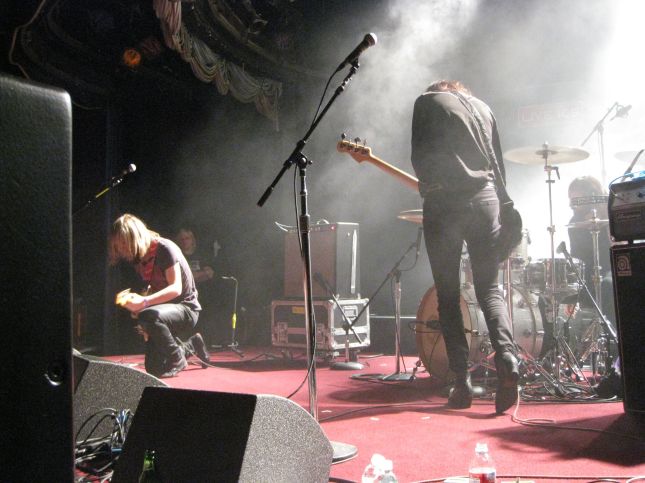 Third time is a charm so they say. And the Band of Skulls show last week at Bimbos was definitely that. They’ve been hitting the States hard promoting their debut album, Baby Darling DollFace Honey, and it is one of my favorite albums of 2009. This was the third performance I caught of theirs this year. It’s been fun to see them climb the venue ladder of success. First Harlot, then Cafe du Nord. Now Bimbos. What’s next? We’ll wait and see.

The latest video from Animal Collective off their acclaimed Merriweather Post Pavillion album.

Pitchfork picked up on the leak of this hardcore edit of Girls “Lust for Life” video. There have been various iterations of the video floating around out there. The director, Aaron Brown, created this X-rated edit using all the body parts that didn’t make it into the official music video from the True Panther Sounds label.  This cut was leaked to The Sword, a gay website.  The question is, how many Xs does a penis make?

The latest release from London-based Fanfarlo, “Reservoir“, might well be one of the sleeper albums of 2009. This is the video for their second single, “The Walls Are Coming Down”.  Their look is very ‘Dexy’s Midnight Runners’ here.