I don’t care what all you hipsters say, I love Jack White and can’t wait to see him with The Dead Weather this Thursday at The Fillmore. Yeah.

First it was The Dead Weather and Yeah Yeah Yeahs, then Sufjan Stevens, now add Noah and The Whale to the list of indie bands making films. With this endeavor, Noah and The Whale’s chief singer/songwriter, Charlie Fink, has crafted and directed a film to coincide with the release of their new album, The First Days of Spring, which is set for October. The First Days of Spring will be released on Cherrytree/Interscope alongside a film of the same name which marks the directorial debut of Charlie Fink and runs the same length as the record.  The release is the highly-anticipated follow-up to their gold- selling 2008 debut album Peaceful, The World Lays Me Down.

It seems The Dead Weather has launched a trend with the premiere of their ‘short film’ by Jonathon Glazer for “Treat Me Like Your Mother” on Showtime last week.

Then I found this crazy short film for The Yeah Yeah Yeah’s “Snakesweat”. Glamorous and weird only in the way Karen O can pull off. Who’s next? I’ll be watching to find out.

I found this latest video from The Dead Weather to be mesmerizing. It documents the vinyl pressing process of their album and it’s fascinating to watch.  It’s all so….analog. The band is running a contest too.  Find one of 5 photo strips in the new The Dead Weather Horehound CD and you’ll win a guided tour through Nashville’s Third Man Records.

Jack White’s new band, The Dead Weather – featuring Alison Mosshart of The Kills, is ramping up for the launch of their debut album, Horehound, on July 14.  Will the sum be greater than the parts?  We’ll have to wait and see. Luckily not for long. The band has announced a live performance on From the Basement TV this Monday, June 22 at 9PM BST/ 1PM PST. Mark your calendars and tune in.

From The Basement TV 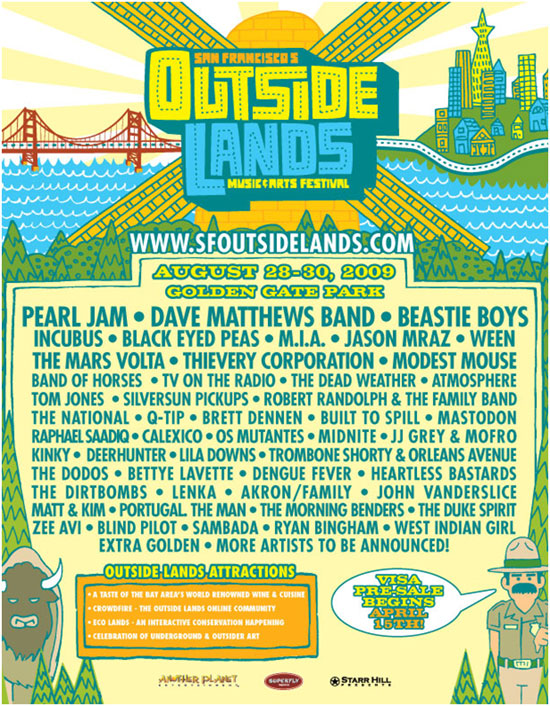 Here it is.  The initial line up for Outside Lands.  And all I can say is WTF? Pearl Jam, Black Eyed Peas and The Dave Matthews Band for christ sakes? We’ve gone from Radiohead to Fergie. That’s definitely going to draw the wrong crowd.  Too bad because the ‘opening’ bands look great – Band of Horses, Silversun Pickups, The Dead Weather (definitely interested in Jack White’s latest venture), The National, Deerhunter, The Duke Spirit.

Ah well, it’s up to you Treasure Island Music Fest.  You haven’t let me down yet.

My man Jack White announced the formation of a new band, The Dead Weather, this week.  The supergroup features Alison Mosshart, of the London-based The Kills as lead singer; Dean Fertita of Queens of the Stone Age on guitar; and Jack Lawrence, from the Raconteurs, on bass. The renowned guitarist, Jack White, plays drums. Go figure.

Their debut album Horehound will be released in June.  The single “Hang You From the Heavens” is available now on iTunes.