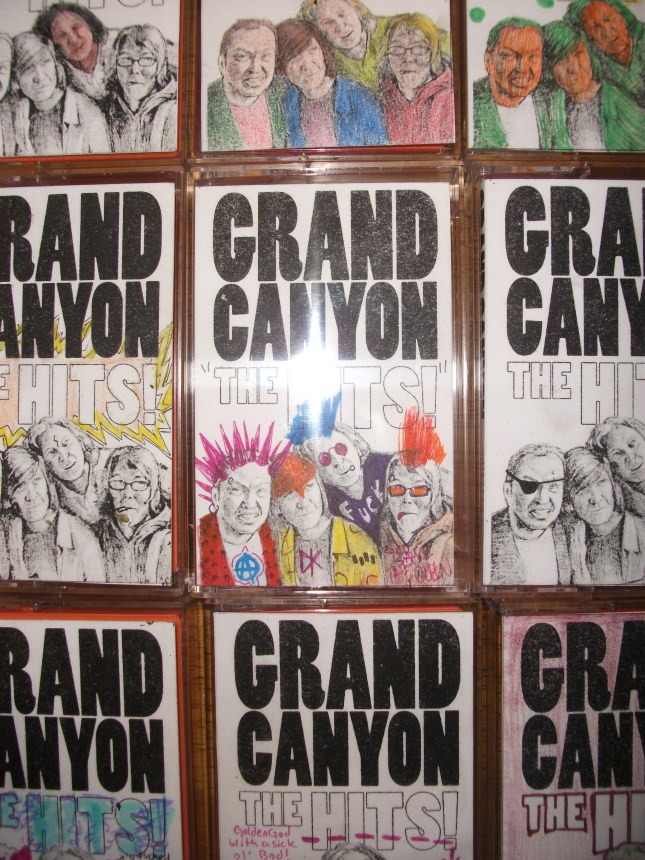 Grand Canyon is a New Mexico-based band that recently emailed us about their debut album release ‘The Hits’ on cassette tape.  They shared with us their insights for choosing cassette as their physical medium.  The group also has a digital version of the album, which you can download for free on Bandcamp.

For us, cassettes were the right choice for a lot of reasons.  The biggest was that a lot of the material (mainly drum tracks and vocal tracks, but some guitar and bass too) were recorded originally on cassette tape on a Portastudio. So we wanted to keep some of the release analog in the same way.  We also took a very DIY approach to this album (it’s all self-recorded and self-released) and the lithographed and uniquely colored j-cards, and uniquely colored tape labels (all done by the band and a few friends) were just another way we could showcase the do-it-yourself experience. Tapes were only a little cheaper than CDs, which helped, but we thought that the appearance of the final product of the tapes was aesthetically much better than the similarly priced discs.  Plus the coloring party was fun.

Sound wise, we were into the idea of tapes too.  Three of our four band members are in our mid-twenties, so we grew up listening to music on cassette.  Cassettes, of course, offer “that analog warmth,” and while the sound doesn’t stay as pristine on cassette as it does on cd (assuming you can keep your discs from getting scratched, but that’s a different story), we kind of thought the weird sounds you get as tape deteriorates and cassettes warp are at least interesting, and can add to the listening experience.  CDs make for boring, over-compressed background music.

Our last reason for going with tapes was that we think in the world of mp3s, even cds are totally obsolete, or at least will be soon.  So we figured it didn’t matter what medium we used to release the album physically.  We had all the reasons I listed above to do tapes, plus it worked as a marketing tool.  When people asked us, “Why tapes?,” we responded, “Why not?”  And it got people talking.  Plus we thought an interesting looking, and uniquely designed cassette was something people could take home as a collectors item, whether people listened to the 29 tracks of our original music on it or not. And we sold all 50 of the run at the release show, so it seems to have worked.

One thought on “Cassettes Are The New Vinyl, Part 2: A Band’s Perspective”