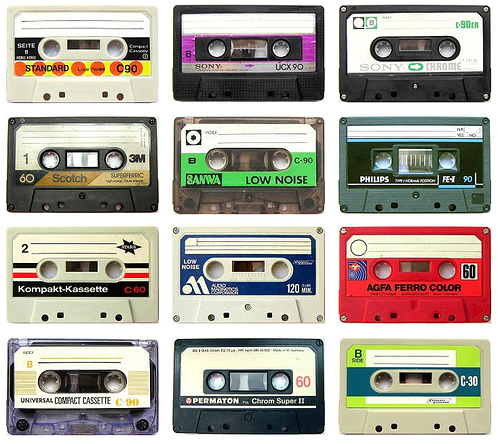 Dig out your boom boxes, tape decks and head cleaners because another almost obsolete music format, the cassette tape, is quickly being brought back to life. They’re turning up everywhere, being released by bleeding edge DIY hipster indie bands with a penchant for the self-released EP.  Dive deep into your local indie music scene and you’ll see what I mean. Merch tables are filled with them and the frequency of the cassette EP press announcements in my inbox are quickly rising. If vinyl is the format for the high browed music snob, then the cassette is the format for the DIY, crafty crowd.

It’s been a source of great frustration for me of late to discover fabulous up and coming bands live, then realize the only option for continued enjoyment of their music is a format I haven’t owned equipment for in a good decade. Grass Widow, The Baths, Blank Dogs. These are all bands that released music on cassette that I would have liked to have in my music rotation but couldn’t do so because….I DON’T HAVE A CASSETTE PLAYER!  God dangit. Who still owns a cassette player? (Besides Blogger Mike who has three. Sheesh.)

Frustration turned to anger after my third attempt to buy music from a band with a cassette only option. (Why, why, why are you making it so difficult to support you?!) Then the anger turned to action.  I needed to understand the rationale these artists had for adopting a format that is clearly not widely used. Was it a cost factor? Cool factor? Sound factor? Did they want to languish in obscurity because no one could readily appreciate their music? What…what was the allure?

Welcome to The OCMD trendspotting series, “Cassettes Are The New Vinyl”, where we’ll explore the rational of artists and labels reviving this nearly dead format that so dominated my youth. Tune back in for Part 2 where we’ll get insight from a band and their reasons behind choosing cassette for their physical format.

6 thoughts on “Trendspotting: Cassettes Are The New Vinyl”