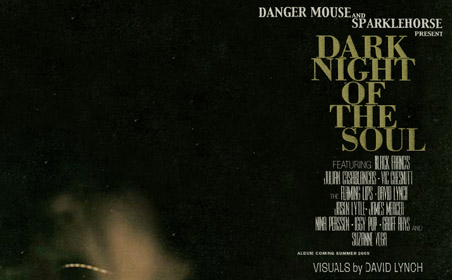 In probably one of the more ingenious marketing launches of an album, the mysterious and elusive details of Dark Night of the Soul – the collaboration between Danger Mouse, Sparklehorse and David Lynch (yes, that’s right) – are now available.  You can actually stream the album now on NPR Music.

It all started with mysterious posters all around Austin during SXSW this March.  I saw them and was intrigued.  I love pretty much everything Danger Mouse touches. Then information started to emerge.  Dark Night of the Soul is an album of songs written by Danger Mouse and Mark Linkous of Sparklehorse and features a myriad of other artists including James Mercer of The Shins, The Flaming Lips, Gruff Rhys of Super Furry Animals, Jason Lytle of Grandaddy, Julian Casablancas of The Strokes, Frank Black of the Pixies, Iggy Pop, Nina Persson of The Cardigans, Suzanne Vega, Vic Chesnutt, David Lynch, and Scott Spillane of Neutral Milk Hotel and The Gerbils.

The album was supposed to be released in July with a book of photographs by David Lynch.  But due to ongoing disputes with label EMI, the album will not see an official digial or physical release. (Oy…labels.) So the band will be releasing the album as a blank CD-R with a note to fans to download it from an illegal filesharing network.  For now you can enjoy a free stream of the album on NPR Music. Check it out now, while it lasts.  You can pre-order the CD (albeit blank) with book of 100 original photos from David Lynch on the bands website now.