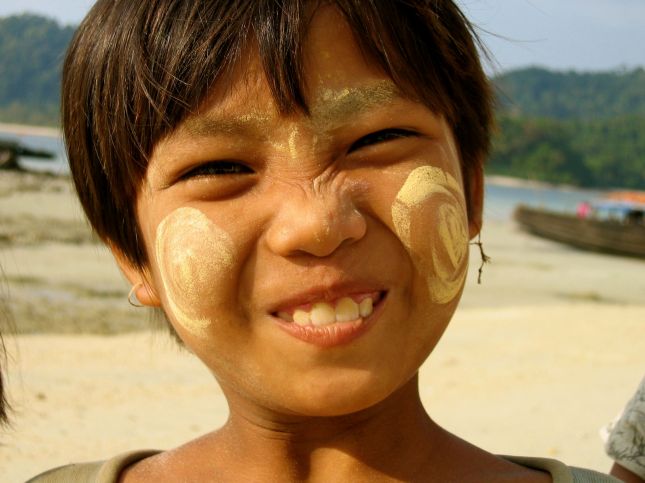 Noah and The Whale, “Five Years Time”
With all the buzz surrounding London-based Noah and The Whale’s much anticipated sophomore release, “First Days of Spring“, I couldn’t help but get nostalgic for this track that I love so much from their debut album released last year. It’s such a sweet song – joyous and childlike – that it makes me nostalgic everytime I hear it for this place and time five years ago, sailing the Mergui archipelago off the coast of Burma. A trip of a lifetime that still holds the title of ‘best trip’.  And I’ve been to some cool places.
But there’s nothing like meandering through a chain of 800 completely isolated, undeveloped, uninhabited and breathtaking islands.  The only people we encountered during that trip were the local sea gypsies, like this little girl who was so vivacious and infectious she charmed me out of every possession on my body. Who knows how her life has unfolded, five years later, but I’m sure she’s still skipping along, doling out love and smiles where ever she goes…..“There’ll be love, love, love where ever you go.”
Noah and The Whale have just announced a limited US tour next month in support of their new album, “First Days of Spring”, that hits October 6.  Lucky for me, they’re heading our way!
OCTOBER
20 – Los Angeles, Calif. @ The Roxy Theatre
22 – San Francisco, Calif. @ Swedish American Hall
24 – Seattle, Wash. @ Crocodile Cafe
25 – Portland, Ore. @ Doug Fir Lounge
29 – Chicago, Ill. @ Lakeshore Theater
30 – Pontiac, Mich. @ The Crofoot’s Pike Room
31 – Toronto, Ontario @ The Horseshoe Tavern

3 thoughts on “Stuck in my Head: Noah and The Whale – “Five Years Time””